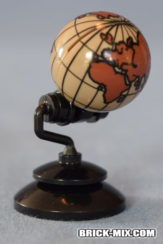 LEGO made a two piece minifigure scale globe a while back, but I hadn’t seen a globe stand for it that I liked.  I decided to make one myself with a paint roller brush piece.

The globe has only appeared a few sets so far.  I think the globe is a neat little detailed part that many LEGO fans would want in a classically decorated study for a minifig, or a teacher’s classroom, or professor’s office.  Since the globe stands (if any) in the sets the piece comes with aren’t to my liking, I’ve been coming back to the globe now and again trying to make a proper stand for it.  Namely one that let’s the globe tilt instead of just spin around. 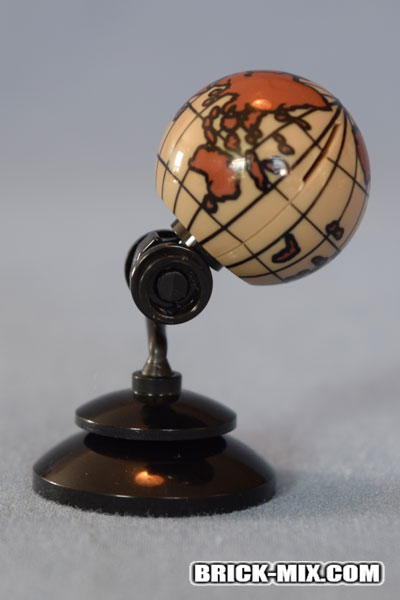 I said I hadn’t seen a globe stand that I liked, and that might still be true after building this one.  Obviously I like it enough to have built and posted it here, but I still think there’s a better globe standing waiting to be made out there somewhere.  If this inspires someone to make one then I’ll be a happy builder.

I do like how slender the stand is.  Other attempts I made to built a stand that let the globe pivot and spin led to something that looked too bulky or tall.  A couple of other attempts looked okay in those regards, but used unusual parts to center the globe on.  Part 30375 worked pretty well from a functional standpoint, but I couldn’t make it look “classy”:

The blue 1×1 round tile on the front could be a neat compass piece that would be a neat decoration for the stand.  Still, it doesn’t look very appealing to me.  It’s sturdier, but it also has a second pivot point at the feet which isn’t ideal either. 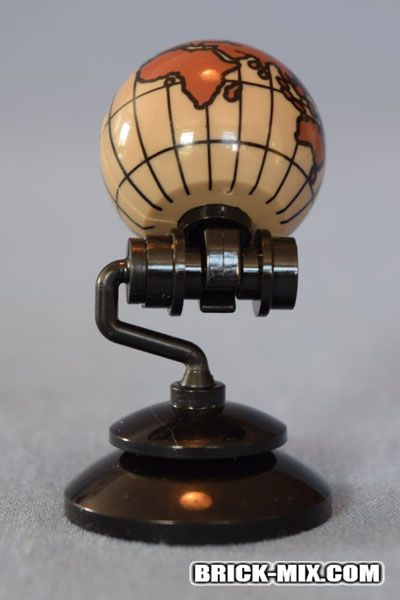 My biggest concern about the stand being made of the paint roller brush piece is that it’s flimsy.  There’s not really any problem using it.  It tilts and spins just fine without bending as long as you’re not being intentionally rough with it.  It’s also been on my shelf for a while and doesn’t yet show signs of bending the paint roller over time under the weight of what’s on it.

I’m just used to what I make being as robust as possible, which this is not.  I suppose it’s building out of my comfort zone, which could lead to something I wouldn’t otherwise have tried, which could be fun.

I’m not sure what, if anything, was inside the globe in the set it was in.  For mine, I found that putting in the three pieces above worked well, the bottom piece being a round 1×1 plate with a hole in it.  The entire build is only 12 pieces.

Below is the LEGO Digital Designer file for the globe stand.  Unfortunately the globe didn’t want to make the connection to the stand in the program.  I’m sure you can figure it out yourself, especially given the partially assembled picture above.  Even though this globe isn’t a very common piece, I hope the few of you out there that may have one of these globes find some inspiration from this post.  As always, happy building!

Also, thank you to Reddit user tavo2809 for pointing out that the globe has actually been in a few LEGO sets, not just the one I originally thought.

And another thank you to Reddit user SP4RK4RT for pointing out that the globe (the hemispheres at least, no globe pattern) was in LDD after all.  I just didn’t have the extended settings turned on.  Whoopsiedoodle.