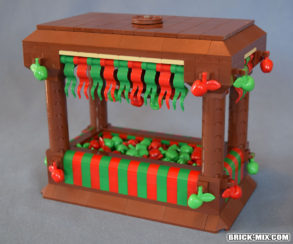 In keeping with my last post’s theme of LEGO creations for the little knick knack friends on my shelves, today I have a bed of apples I made for one of them.

This cozy little cove of slumber is done in the style of a canopy bed, but with flags hanging down instead of curtains.  Another difference you might notice is instead of any kind of mattress there’s a big pile of apples to sleep on!

But who would I have made this wonderfully apple-themed bed for?  Well, we can assume whoever it is likes apples, and doesn’t mind sleeping on a hoarded pile of them rather than the arguably more comfy beds most people would prefer.

Enter Apples the Dragon, a small knitted finger puppet with an apple-red body and green wings in the shape of apple leaves.  I’ve had him for a long time.  I don’t even know where he originally came from.  Perhaps he found me one day while I was eating an apple and decided to stick around.

In the picture above he’s using his very powerful apple dragon magic to turn newly sprouted pine cones into pineapples, which is just one of his many amazing talents. 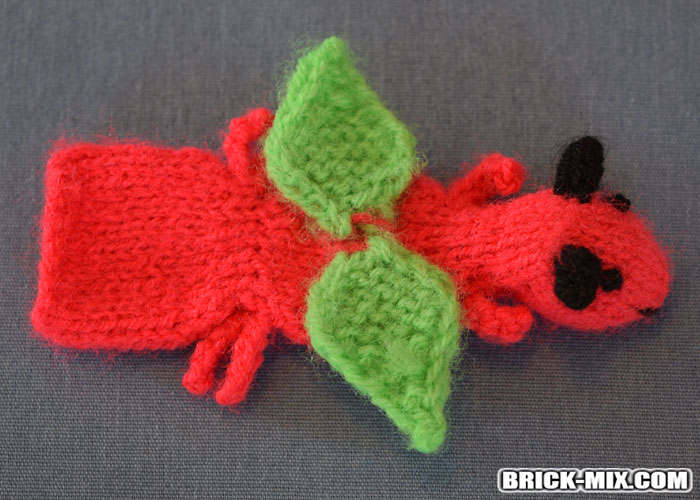 Here you can see Apples the Dragon in all his perfectly knitted splendor.  He’s a rare six-legged dragon and about four inches long.  That may seem small to some but he’s significantly larger than a LEGO minifigure, so the bed of Apples had to be larger than other beds you’d normally see made out of LEGO. 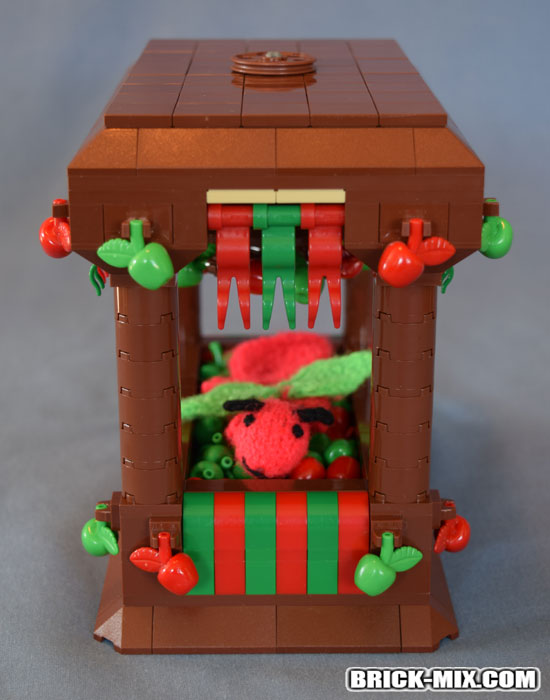 The bed is a perfect fit for him, which shouldn’t be surprising since it was custom made for the little guy.  His only instructions to me were to “fill it with apples and also have some other apple decorations please”. To accommodate his request I included red and green flags hanging around the top of the bed, added red and green stripes around the bottom, and hung some apples at the corners of the bed.

Though Apples is always smiling, I think it’s still obvious he’s quite happy with how it turned out. 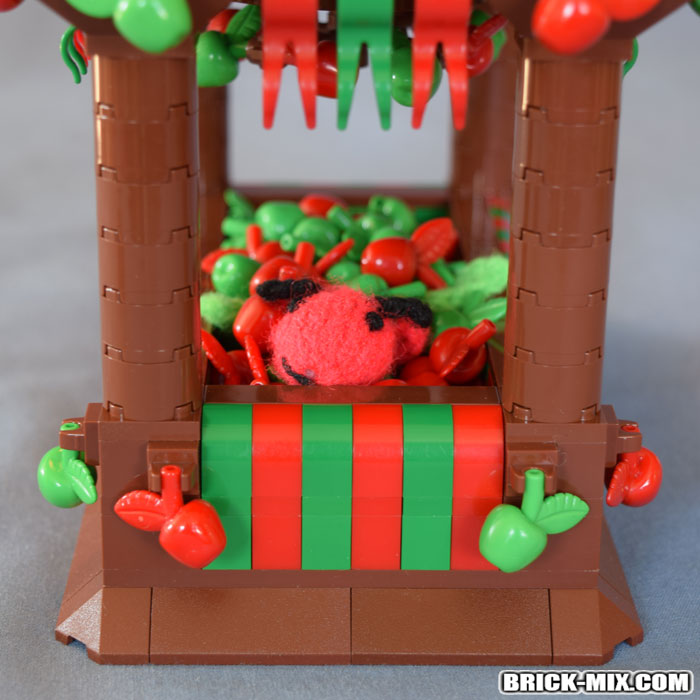 He usually sleeps on top of all the apples, but sometimes he buries most of himself in the pile using the apples as both bed and blanket.  He tells me it’s very comfortable, but whenever I’ve tried it myself I’ve found that I have a hard time falling asleep in a pile of apples. 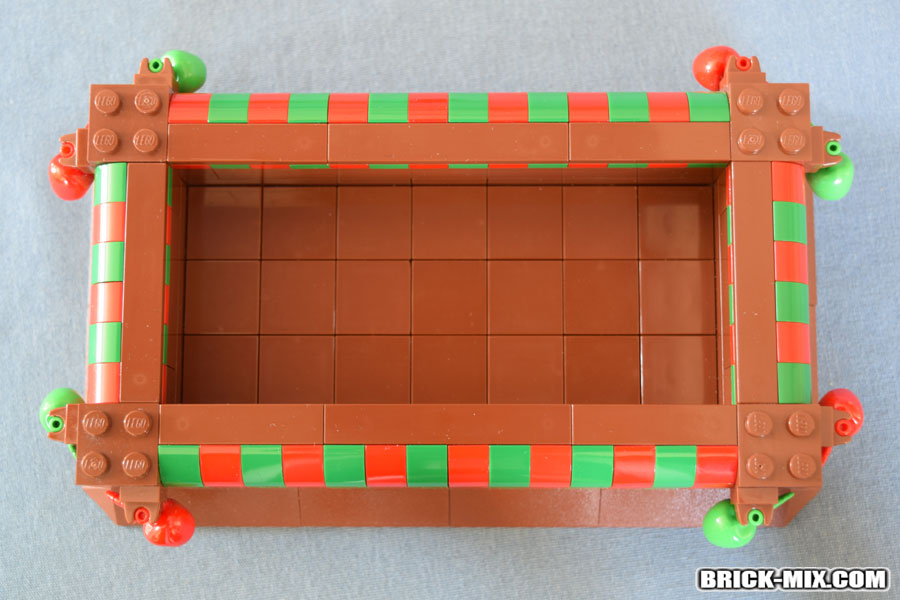 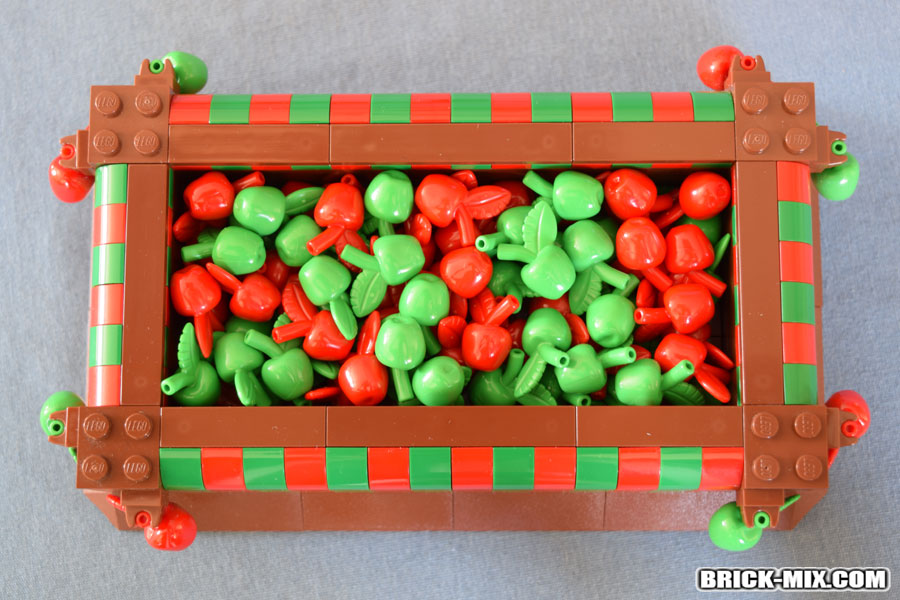 Above are pictures of the bed empty and full of apples.  I got special permission to take a picture of it emptied, as it’s only supposed to be empty when fresh apples are being swapped in to replace the old ones that inevitably get eaten.

After using 24 apples to decorate the bed I just kept putting pair of red and green apples into the bed until it looked properly full.  Completely by chance, the number that made it look properly full turned out to be 76, totaling 100 apples exactly used for the bed. 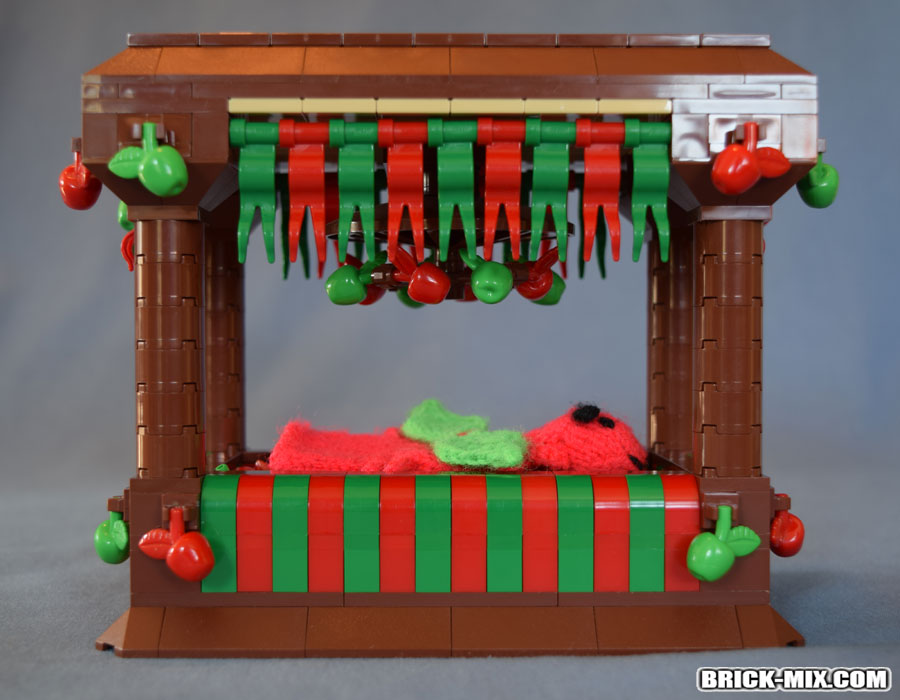 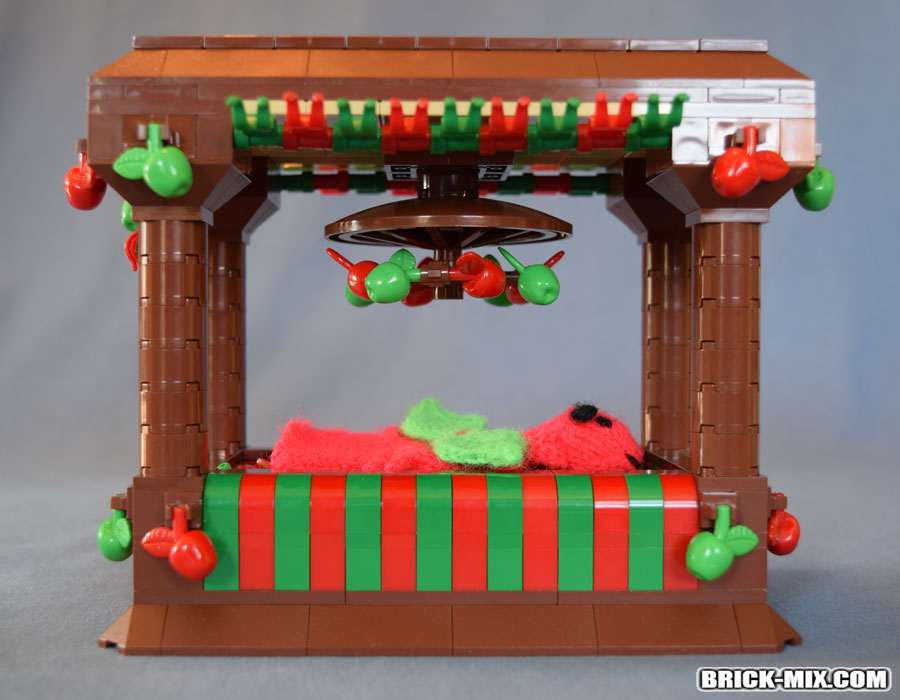 Speaking of the 24 apples used for decoration, 16 of them are found around the corners of the bed along the outside, but the other 8 are used in an apple mobile that hangs inside the bed!  It actually spins around, connected to the pulley you can see atop the bed in other pictures.  One day I’ll connect it to a windmill of sorts that can spin the mobile and grind apples into applesauce. 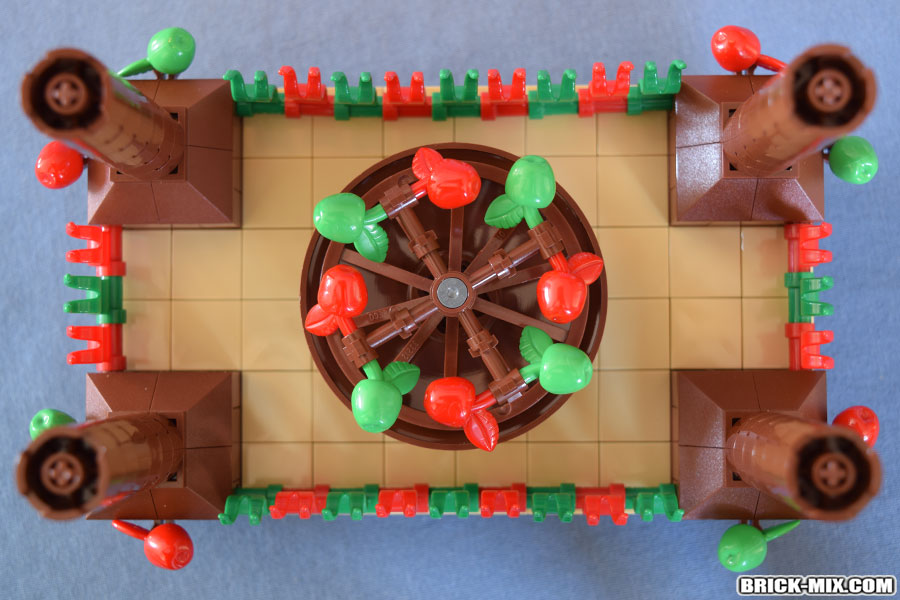 Here’s the view of the mobile you’d see from inside the bed of Apples.  I’m very happy with the way it came out using a big wagon wheel and the dish.  My only complaint with its appearance is that the axle with stop (Part 55013) it spins around didn’t come in a better color to use in this build.

You can also see the ceiling is made of tan tiles, which I thought complimented the other colors nicely.  Another thing of note here is the columns made of 2×2 round bricks are reinforced with brown axles going through them, because I of course wanted to make the bed as sturdy as possible. 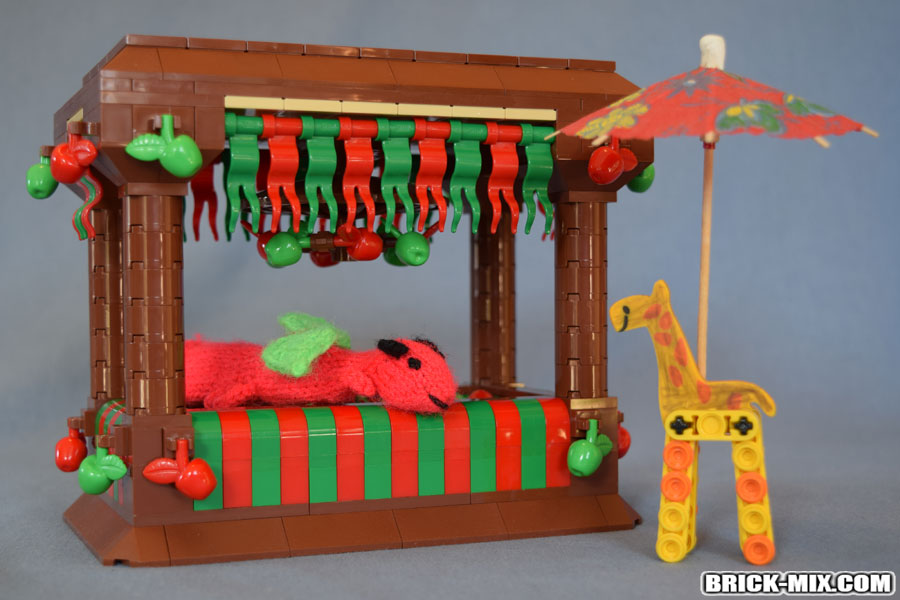 Who could be daring enough to brave the lair of this dragon?  Why, it’s Harrington and his trusty umbrella!  Don’t worry though, he’s not in any danger.  The two of them are good friends, and have been since the day they met on my shelves.  I’m sure they’re just meeting to head out on a pleasant stroll to somewhere they can share a picnic full of apples, apple pies, candied apples, and all other manner of apple foods.

Below is the LEGO Digital Designer file for “The Bed of Apples”.  I’m guessing many of you won’t have apple dragons in need of furniture at home, but perhaps there’s some aspect of this bed that you might like and may want to incorporate into something else.  If so I’d love to see it!

As always I wish you all happy building, and thanks for checking out The Bed of Apples!

LEGO Digital Designer File for “The Bed of Apples”