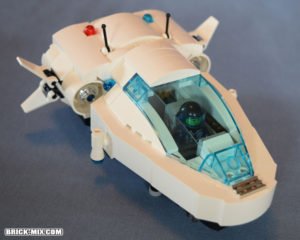 Exploring the vast unknown regions of LEGO space are two brave and intrepid explorers, a man and his faithful dog!  In their zippy little spaceship they cruise around galaxies in style, turning the space-heads of anyone they come across.

At 336 pieces this spacecraft may seem small, but it’s surprisingly full of features.  At one time it had even more room for cargo, but that changed when one day a LEGO space explorer decided to install a second seat so he could bring his dog with him!  His canine companion may not be able to stick her head out the window, but she loves the ride all the same, as it means she’s on her way to explore new planets and smell new space-smells. 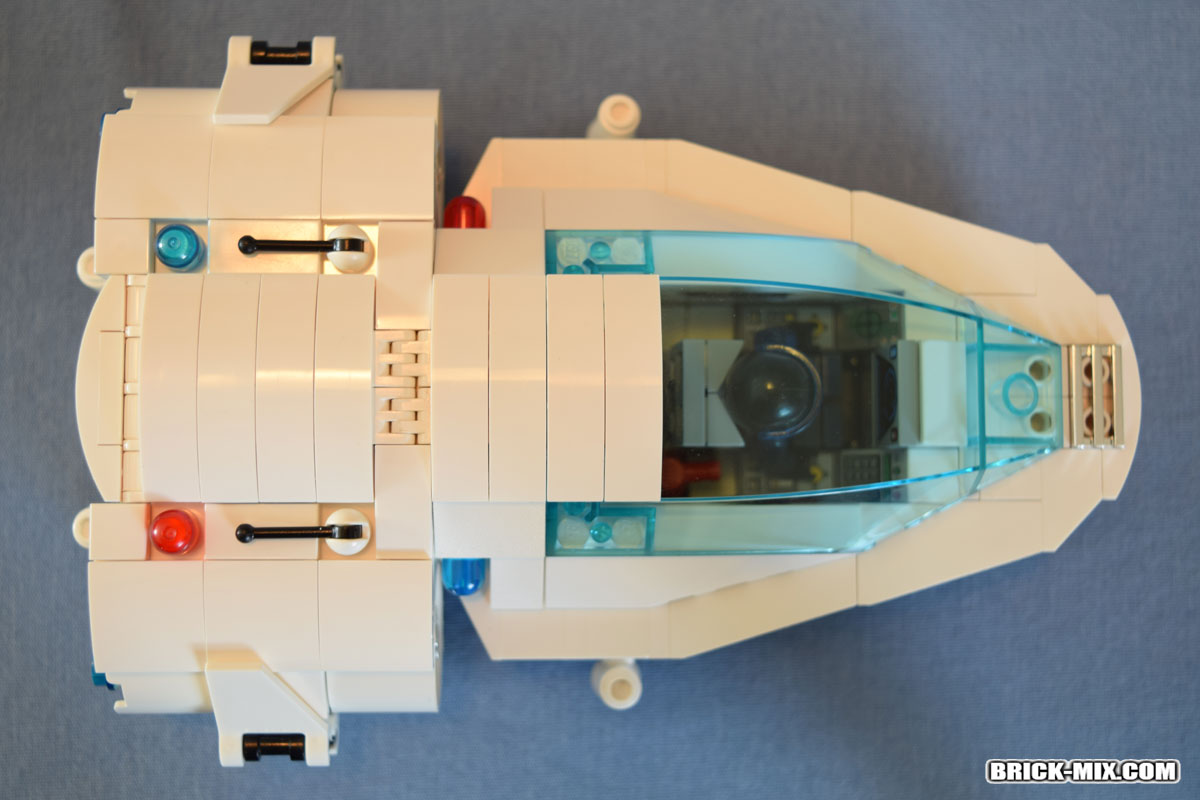 From above the ship you get a better idea of the shape of it.  The forward section houses most of the electronics and of course the cockpit where the two crew members sit.  The rear section is composed mostly of the two sub-light engines and a small cargo hold.

The profile of the ship shows you the first good shot of the landing gear.  Four hinged feet deploy when landing, supporting the ship’s sturdy frame. 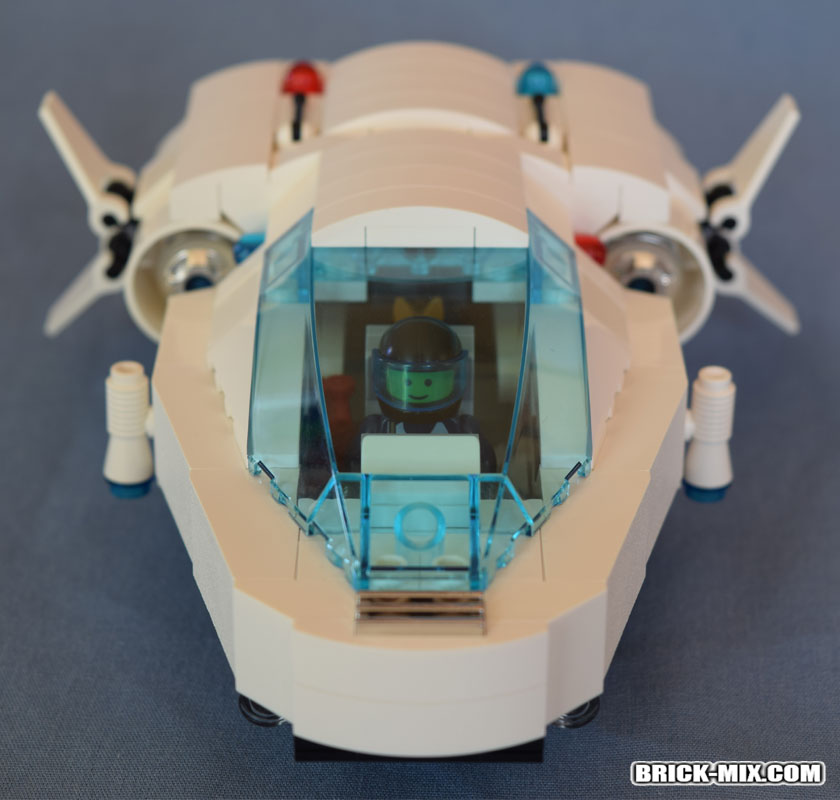 In this view from in front of the ship the rear fins can be seen in a standard flight stabilization configuration, which is used when flying through atmosphere. 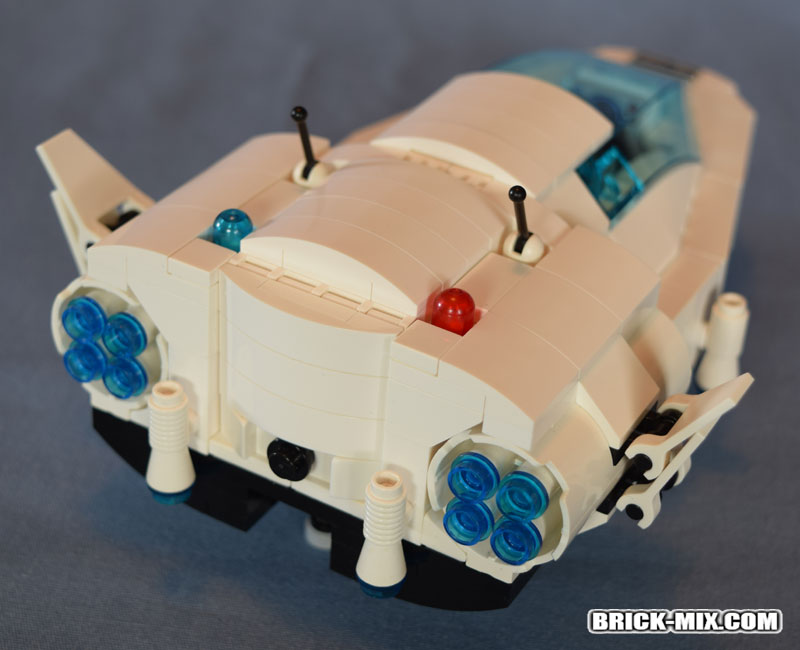 From an angled rear view, the positioning of the four vertical thrusters can be seen.  These thrusters are used primarily for takeoff and landing in their current orientations where all four are pointed downwards.  Capable of pivoting to many angles, the thrusters are also used for course corrections and flight maneuvers while airborne (or spaceborne).

Also seen above is another configuration for the rear fins, used upon re-entry and when landing. 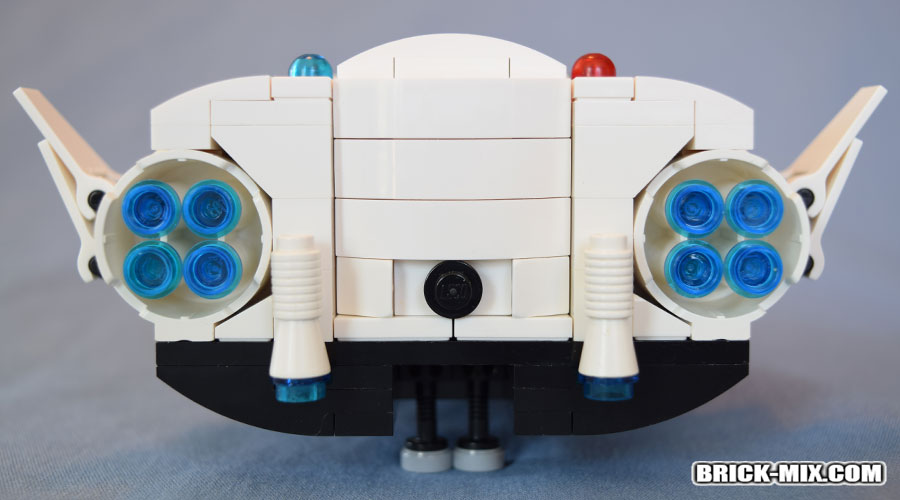 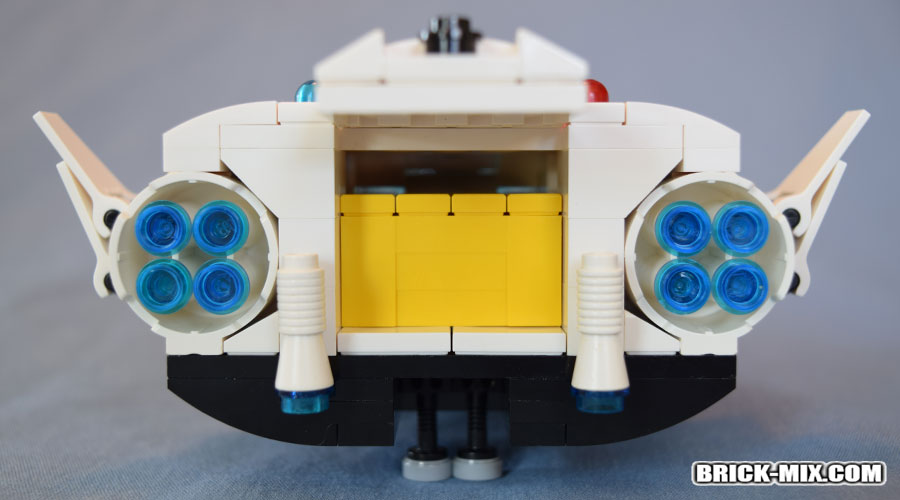 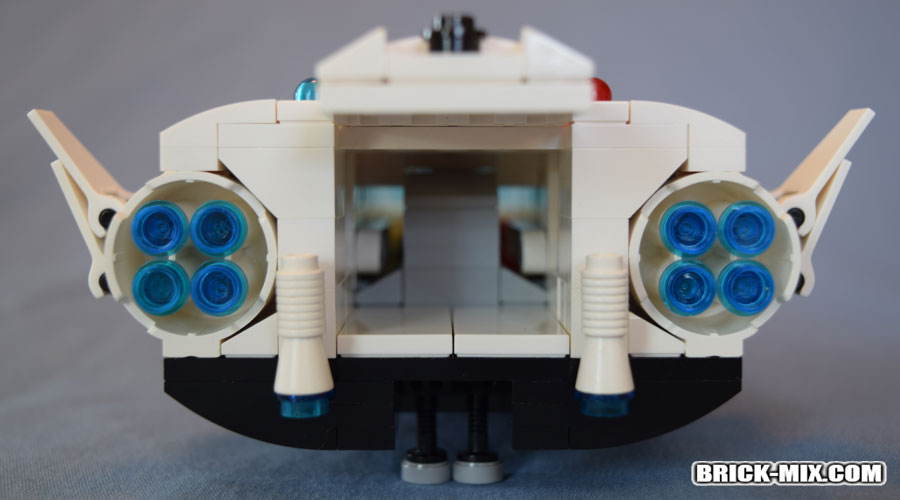 The three shots above show the primary engines and the rear cargo hatch.  While you can fit a variety of things inside, it’s built to hold a 3x4x2 crate.  Another design has a wall between the cargo area and the cockpit, but most spacefarers prefer this option so they can get to the cargo while in flight, albeit with some difficulty.  Kind of like being able to get to the trunk of a car while it’s being driven through those central armrests that fold down, as opposed to not being able to get to it at all. 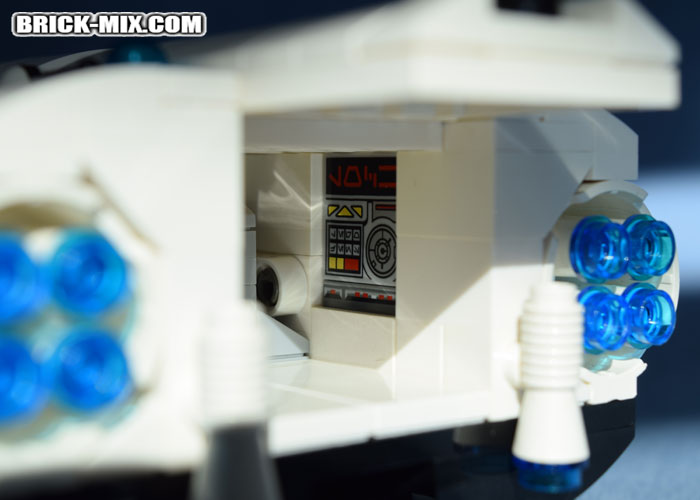 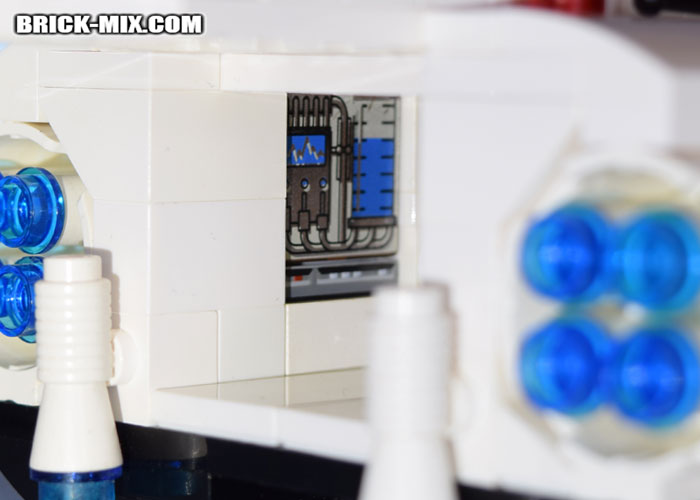 Inside the cargo bay there are also control panels on either side built into the walls.  Not necessary to access in flight, these panels are where power cores, water, and other consumables are swapped out. 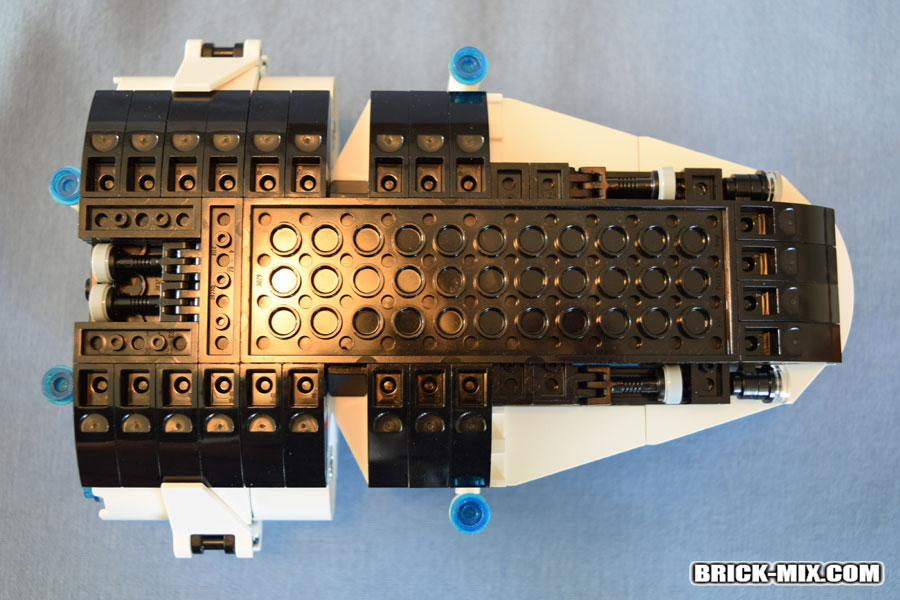 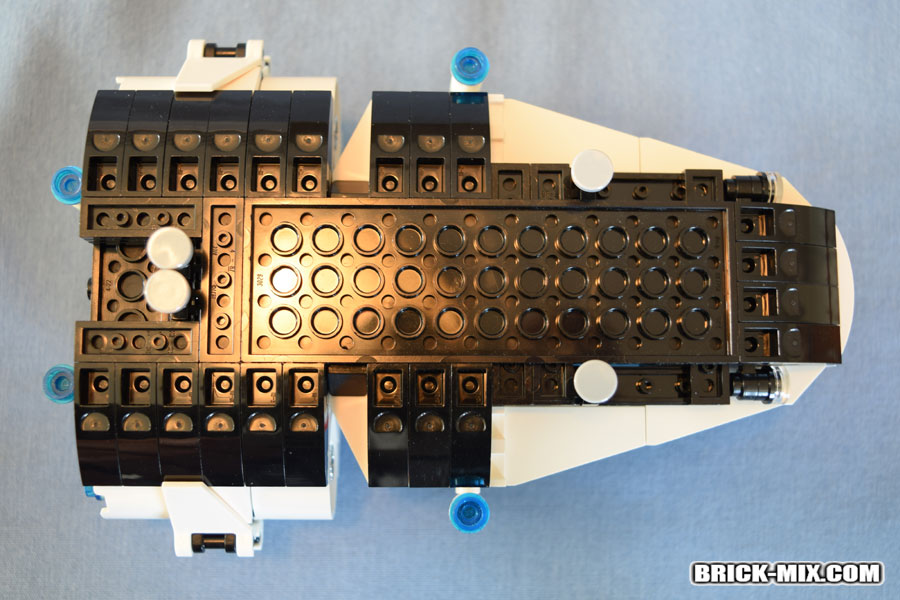 A view of the underside shows off the landing gear when stowed and deployed.  At the front of the ship two lights can also be seen, both very powerful and capable of lighting up a large area in front of the ship. 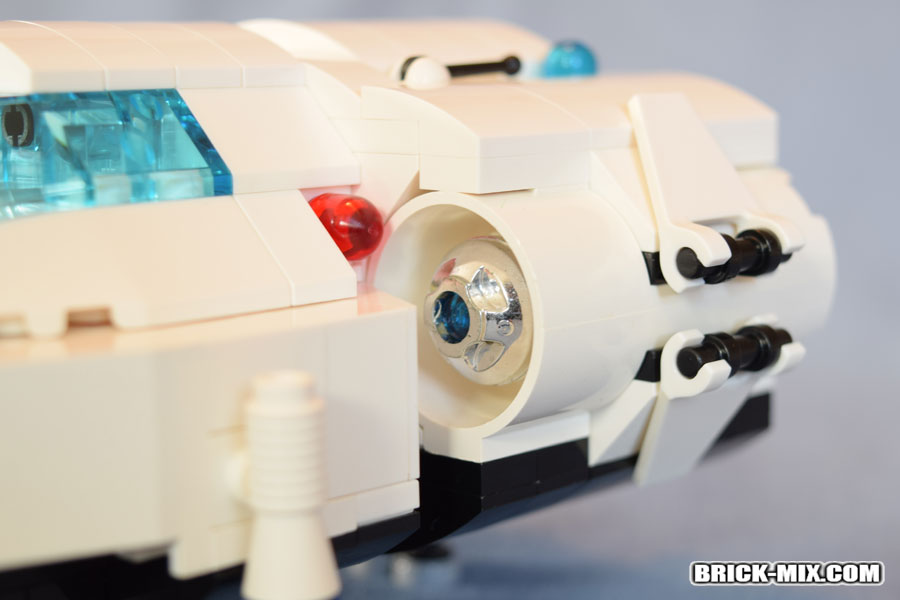 At the front of the engines two shield generators can be seen.  They work by producing an electromagnetic field that can deflect many types of energy including solar radiation.  Either one is by itself capable of deflecting the usual radiation encountered on a flight, but they’re stronger together and redundancy is always good in a spaceship. 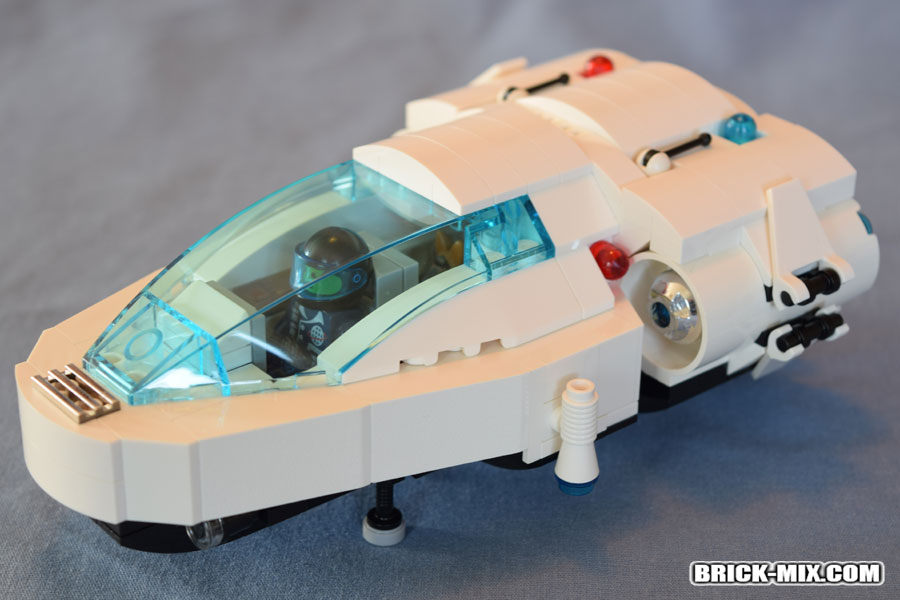 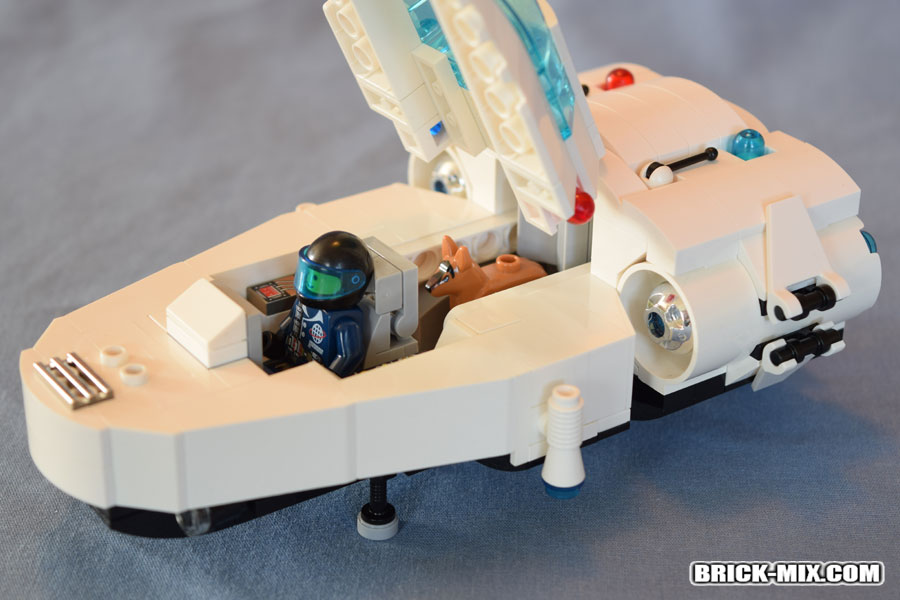 Above are views of the canopy both opened and closed, giving you a better look at our heroes.  At the very front of the ship a vent can be seen.  This vent can analyze outside atmosphere, bring in filtered atmosphere to the ship, or vent the ship when changes in pressure are required. 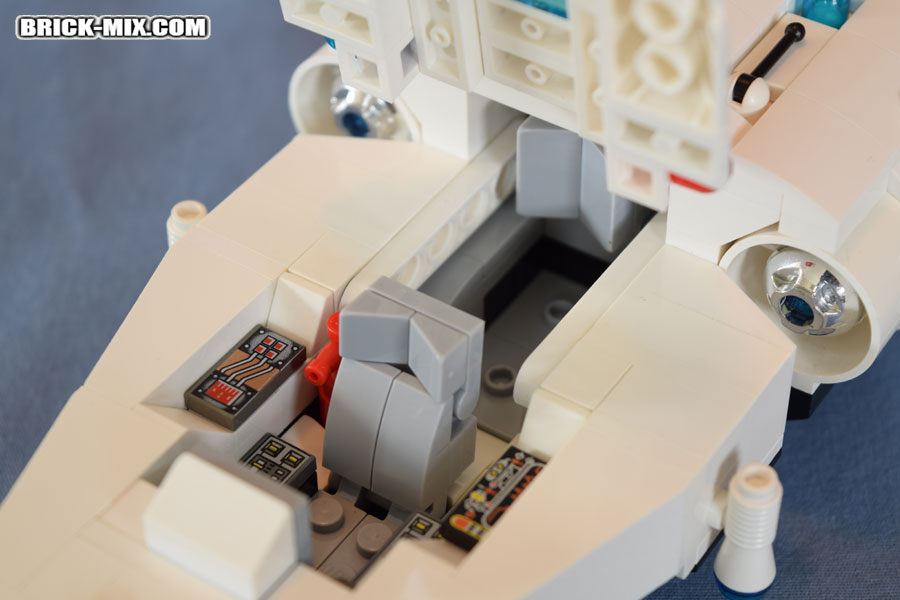 And here’s a view of the vacant cockpit.  You may recognize the Space Seat from my previous post.  A fire extinguisher can also be seen here tucked away to the side of the seat, just in case.  Nobody wants to have to pull over at the nearest habitable planet to put out their flaming spaceship. 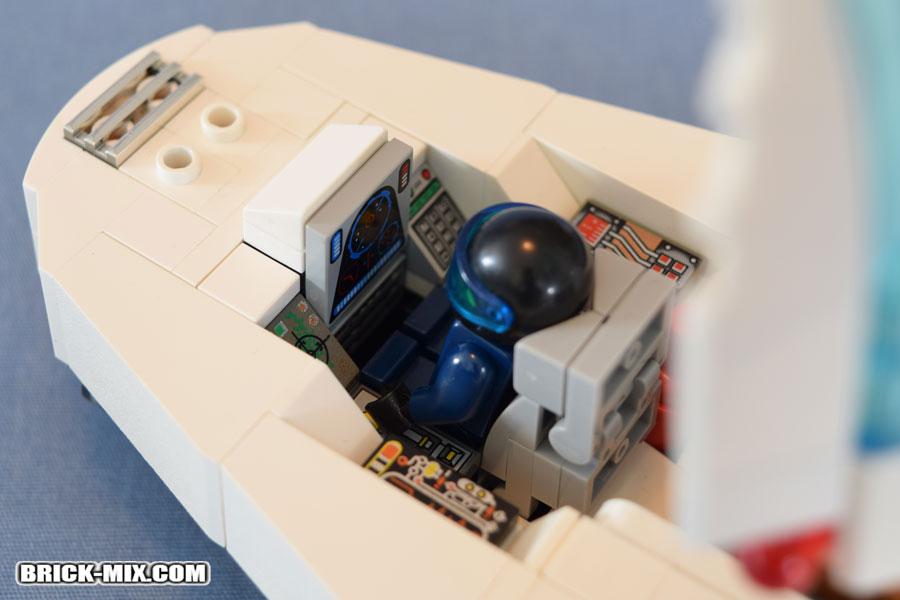 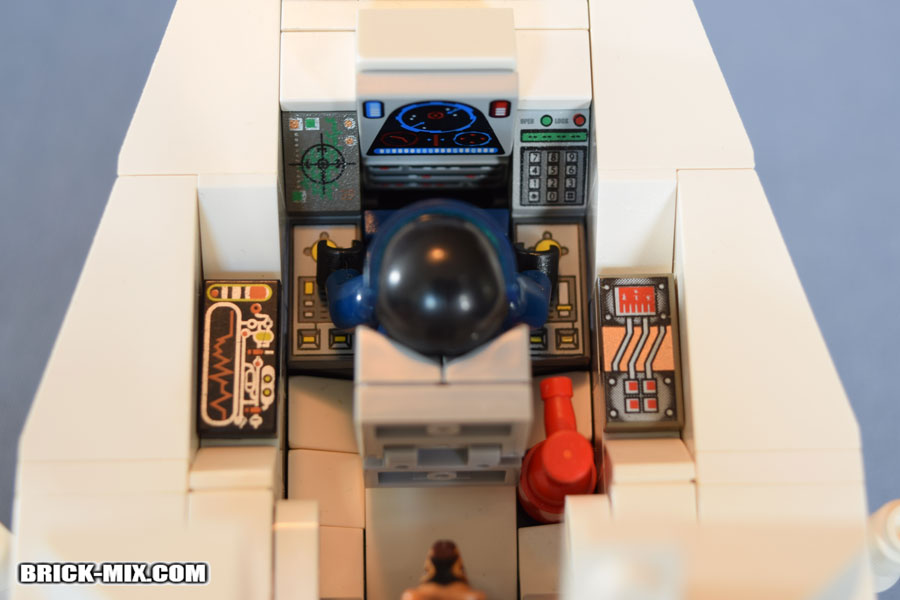 Here a couple shots of the controls inside show you what the pilot has to work with.  Flight is often automated, but when the pilot’s in charge he controls the ship with two joystick-type controls.  A voice command analyzer on the left allows both man and dog to call out commands to the ship.  It can recognize when the dog is barking in distress and sends out an SOS, for example.  The dog has also been trained to use the voice analyzer, and has even been able to have the ship automatically fly to the nearest park without any help from the pilot. 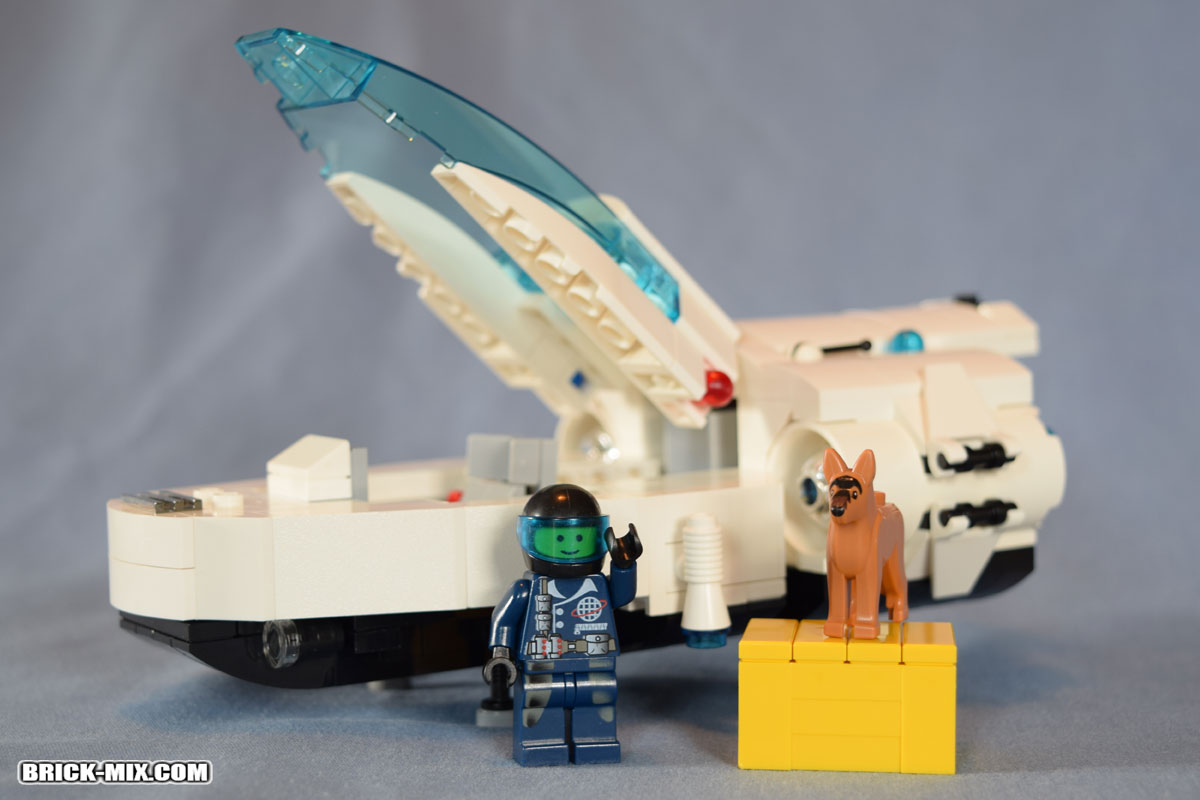 Our heroes.  Have they just arrived?  Are they getting ready to head out?  Is that crate full of anything other than dog treats?  These questions, like so many other mysteries of space, may remain unanswered for some time.  However, if anyone decides to build a spaceship of their own and runs into these two, be sure to ask them for us.  Bring something to eat for the pooch as well and you’ll make a trusty friend, which one can never have too many of in space.

A standard model in this galaxy, the ship comes in other colors and options.  There’s of course an all-black version for your more stealth-conscious spacer, and a flashy orange model for those who want to be seen.  The orange model shown here is experimental, and has been modified with hyperdrive engines mounted where the stabilization fins usually go. 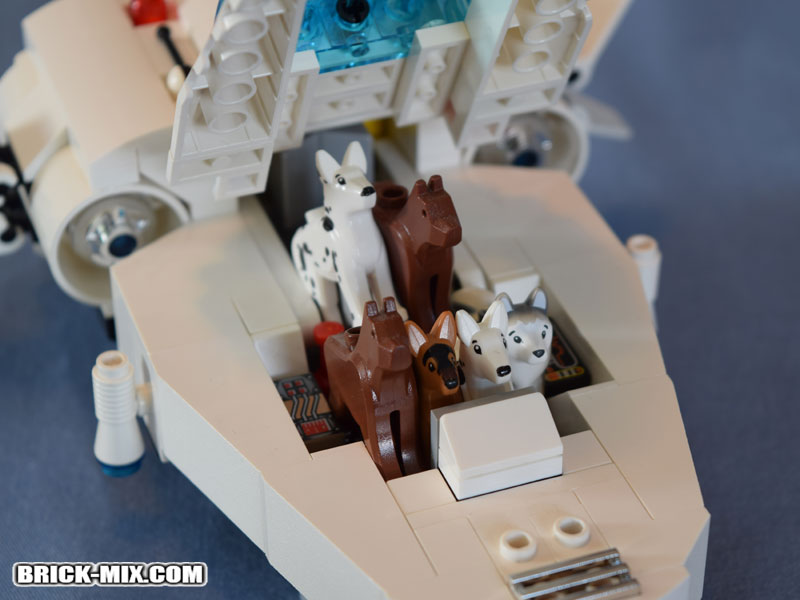 I did not plan for this.  Technically the life support can handle it, and the voice command analyzer and autopilot should be able to get them to wherever they want to go.  Still, I can’t help but feel I should build them a roomier spaceship so they can all fit more comfortably.  Something to come in the future.

This was a really fun build for me for many reasons.  Mostly because it was the first MOC I built after coming out of my LEGO dark ages.  I started to build a spaceship like so many I had built before as a child, and thought “I can do better than this”.  I ended up with this after much trial and error.  It was also before I discovered LEGO Digital Designer, so there were plenty of rebuilds involved.  I’m very happy with how it turned out though, so I’d say it was well worth it.  Besides, the design and construction of the things I build is the best part.

If you’re interested in a piece-by-piece construction of this Small Shuttle Spaceship, I have since put it into LEGO Digital Designer, and the LDD file can be downloaded by clicking on the icon below.  A couple things to note about the file is that LDD does not contain Part 71128, so I put two 2×2 round dishes in the model instead.  Part 71228 is used at the front of engine Part 30360 as the shield generators.  Part 71128 is attached to Part 30360 by two 1×1 studs fit to the middle of 30360, which is a connection the program isn’t too fond of making, so the studs are also left to the side.  Parts 41747 and 41748 are also left off of windscreen Part 45705 because that too is a connection the program isn’t a fan of.

Below are some additional pictures I took that I figured I should include for anyone interested in a few more angles of the ship.  Many of them are very similar to the shots shown above, but as someone who likes as many pictures of someone’s LEGO creation as possible, I felt like I’d be doing an injustice by not including them.