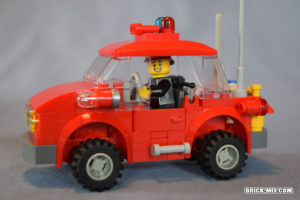 Here’s a little vehicle I like to call a Fire Scouter!  The idea behind it is that the Fire Chief or another veteran firefighter takes this vehicle to the site of a fire, getting there faster than the trucks.  The Chief can then assess the situation and determine things before the rest of the crew gets there, like where the trucks should position themselves, what kind of tactics they should use, and anything they need to prioritize such as people that might be in danger.

Coming in at 124 pieces, this zippy little buggy was born of my desire to use in conjunction Part 18974, a unique mudguard/wheel well piece, and Part 74321, a wheel axle piece with springs.  Part 74321 comes only in red, and the idea to use them on a firefighting vehicle came to me right away. 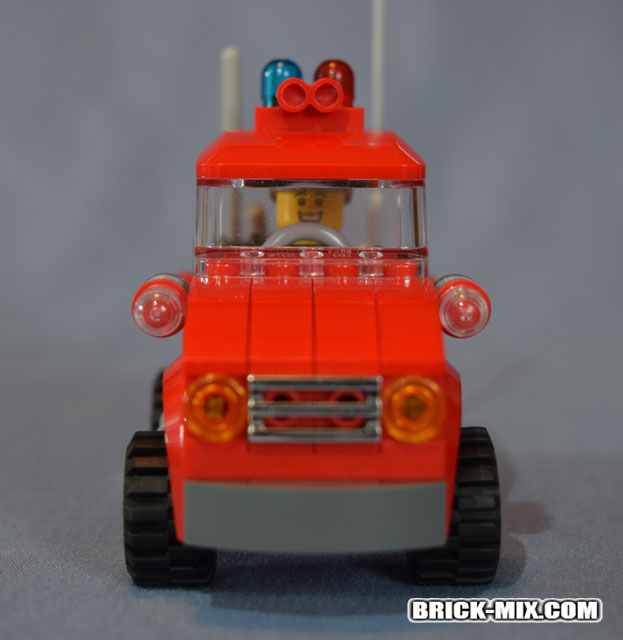 The front of the scouter.  You have some standard headlights and a grill, but also couple of super-bright lights higher up on the sides to light up areas at night. 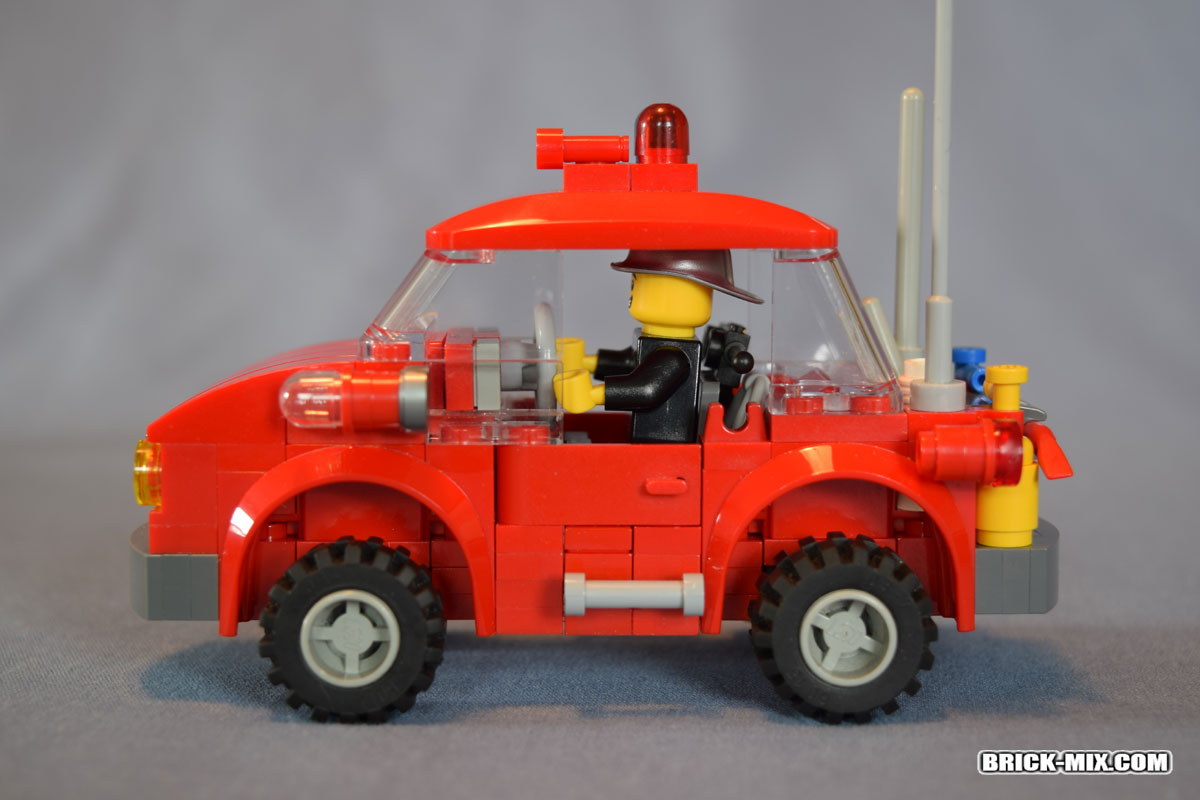 A side view of the Fire Scouter where you can see the special mudguard pieces.  They’re a little trickier to build with than other mudguards if you ask me, since they take up so much space.  It stopped me from doing some things while designing it, but I set out to use them and I wasn’t going to give up on that. 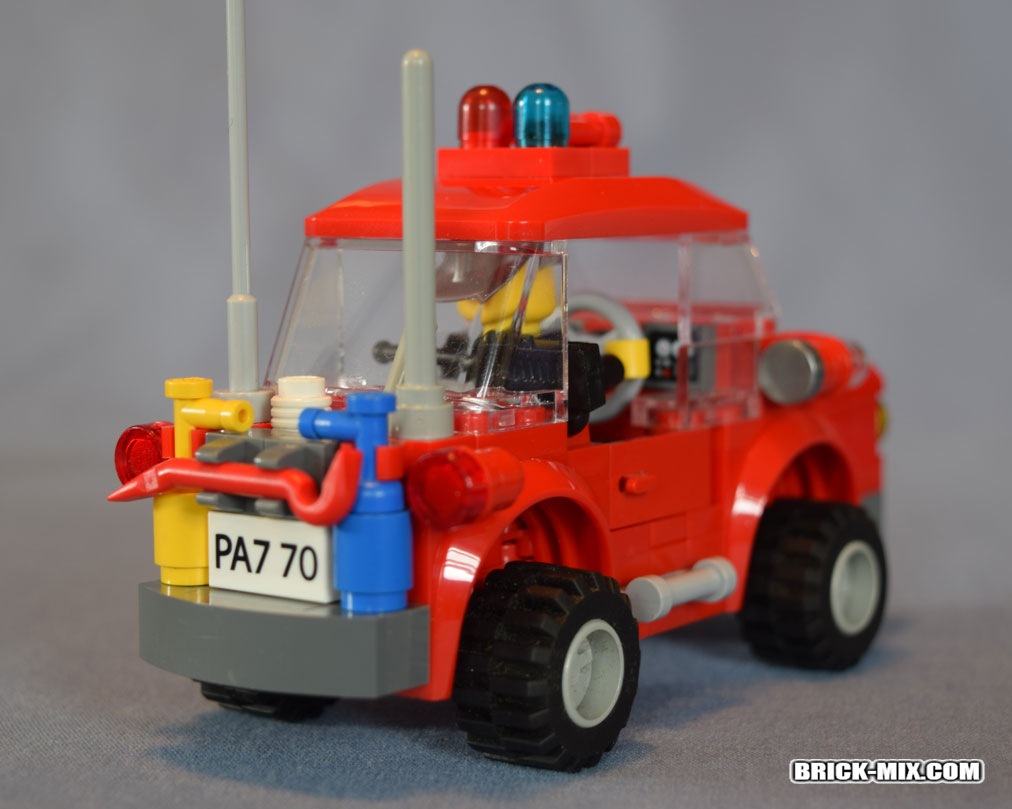 Here’s a rear angle where you can see a lot of the little details like rear-view mirrors, tail lights, the gauges next to the steering wheel, and all the equipment on the back. 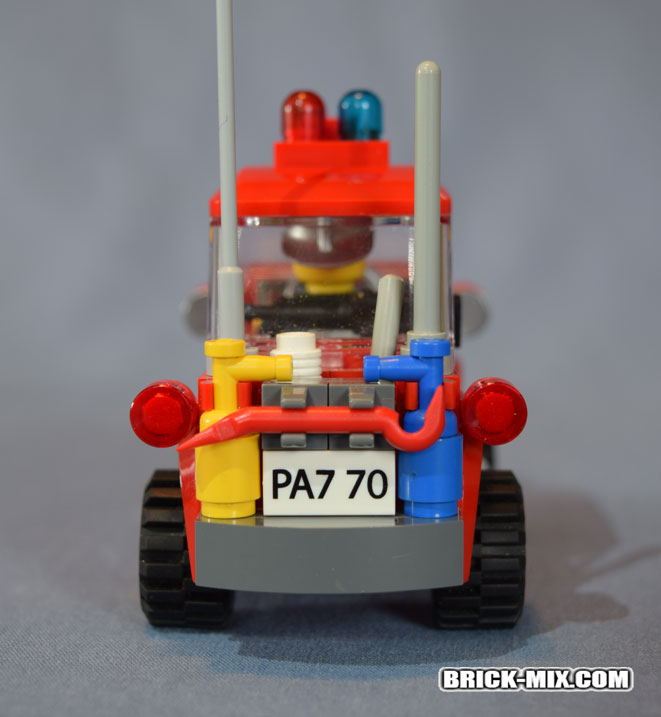 The back has a crowbar, two kinds of extinguishers (one for chemical fires and the other electrical), and a small area in lieu of a trunk where an axe and a megaphone are stored. 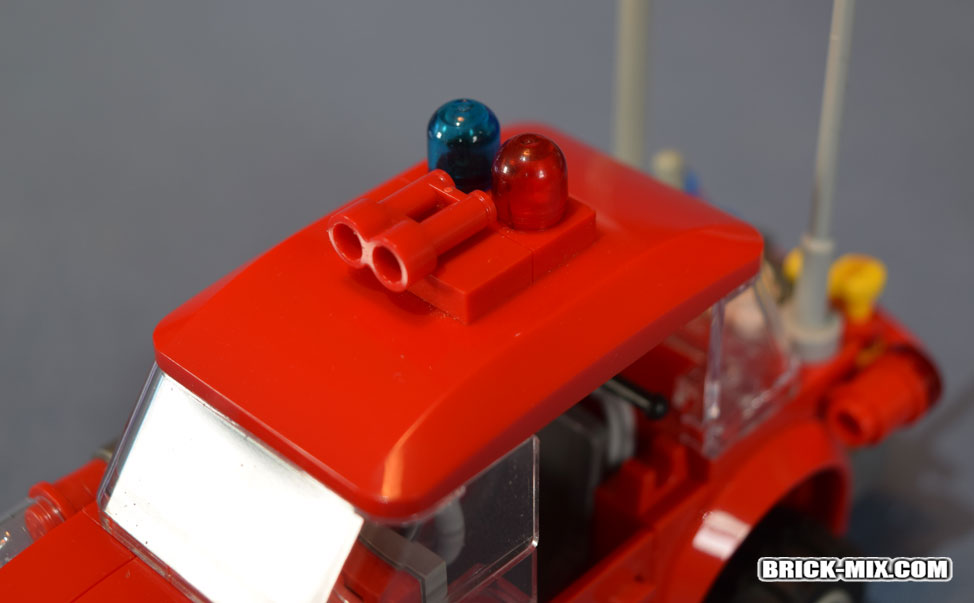 On the top of the vehicle, which is easily removed for access to the inside, you can see the lights and a siren that I used a red binocular piece for. 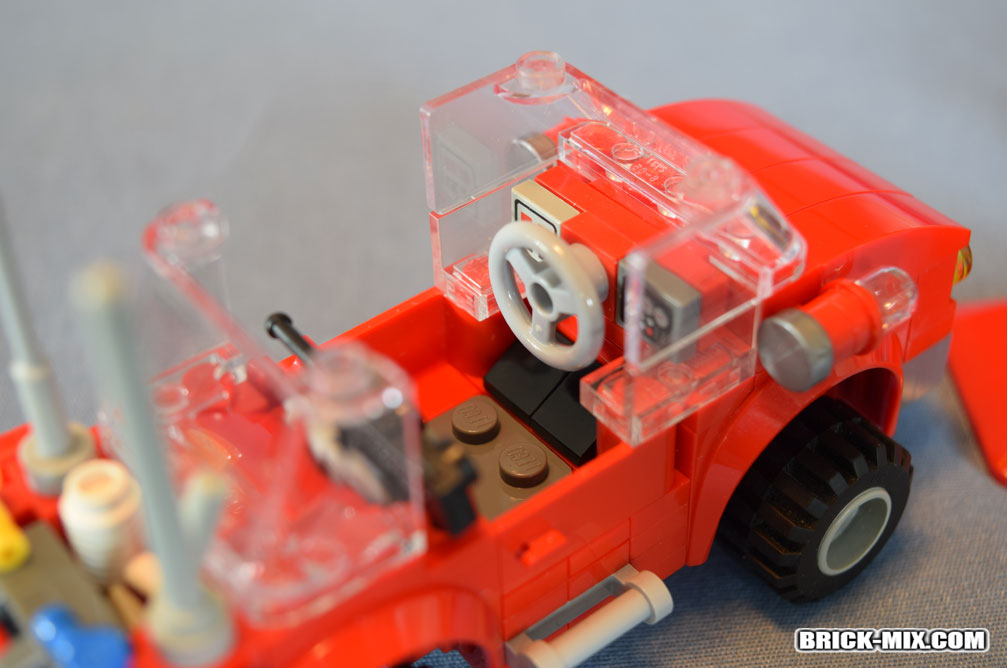 A view of the driver’s area, which has a centered steering wheel and tiny slopes that I like using for pedals.  You might remember seeing them used that way in Fancy Car as well. 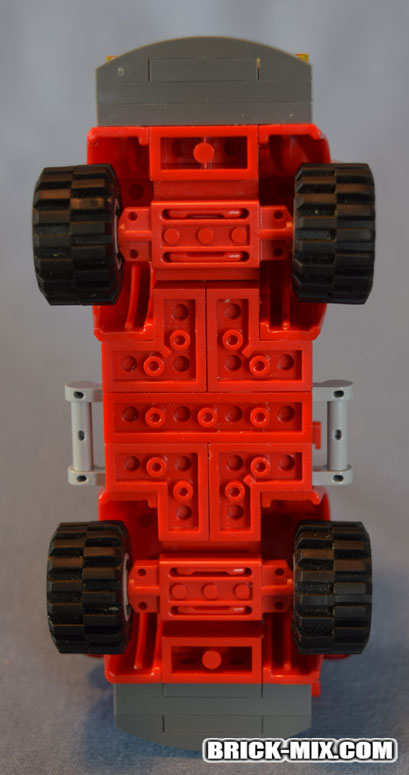 The bottom of the car, where you can see that these aren’t your usual wheel axles. 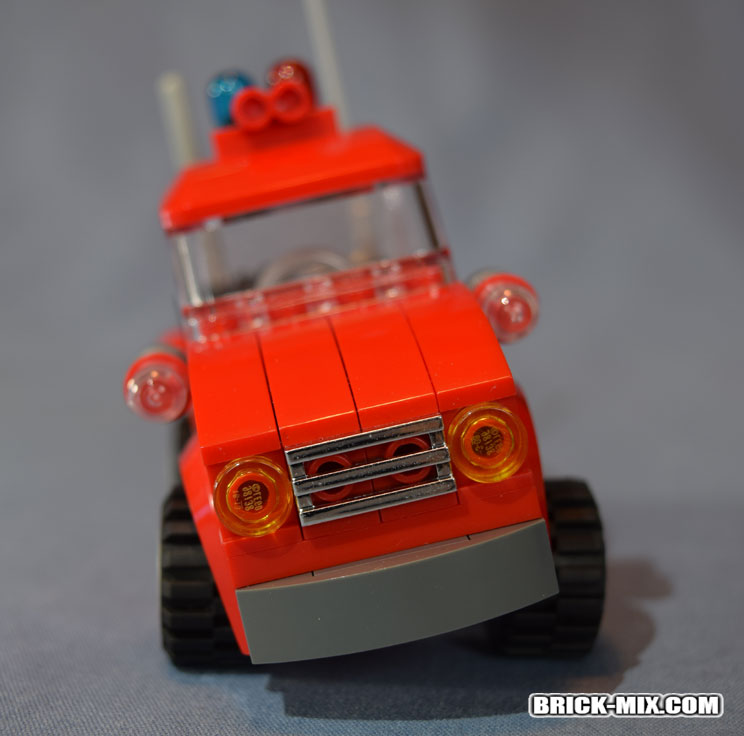 The wheels do this!  It’s fun to rock the whole thing back and forth.  Anyone driving this Fire Scouter will have to inevitably go over some bumpy terrain, but they won’t feel a thing! 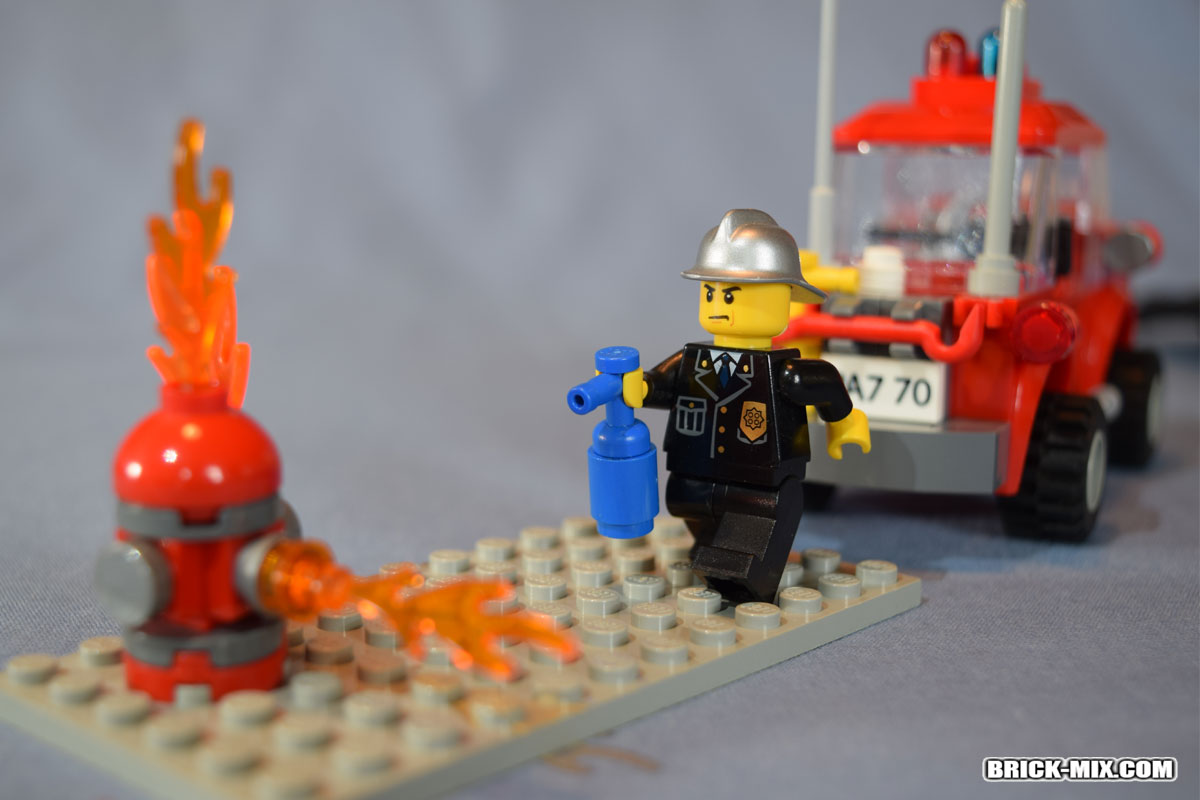 I admit there might be problems with the Fire Hydrant from my last post.  If you don’t put them together correctly there can be… problems.  This isn’t the first time he’s had to deal with this either.

The LEGO Digital Designer file is going to be tricky for this one.  The program is missing both the mudguard/wheel well piece, Part 18974, and the shock-absorbing piece the wheels connect to, Part 74321.  In an attempt to make it easy for anyone who’d like to part it out, I made representative-size pieces in blue to take the place of those two, separated them from the vehicle, and “wrote” their real part numbers down in the file, shown below. 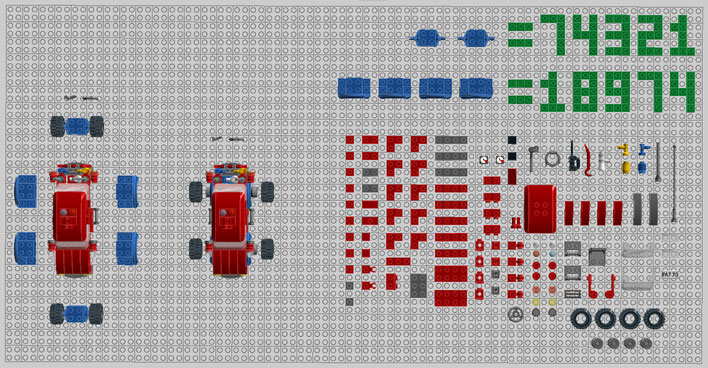 I also spread out all the pieces so you can select only those and add the other 6 pieces in.  Hopefully all this makes it easy for anyone wanting to make their own Fire Scouter.  Sorry about the trouble.  One day I’ll have to look into a better way of doing this.

Anyway, the file can be downloaded by clicking on the icon below.  Have fun!