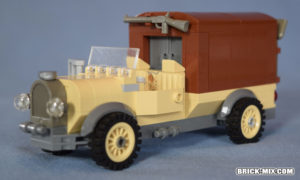 One of my favorite small LEGO sets as a kid was Set 5918 – “Scorpion Tracker”.  With all the adventures mine had in the past, I wanted to upgrade it for more to come in the future.

I remember liking it because it’s where I got my first vehicle grille piece, my first Part 30149 (the part with two seats and a slot for a map, some cool wheels, a crate, and even my first pair of binoculars.  And scorpions, of course.  I incorporated many of the things I liked about it into this remake, adding a few things and improving on others. 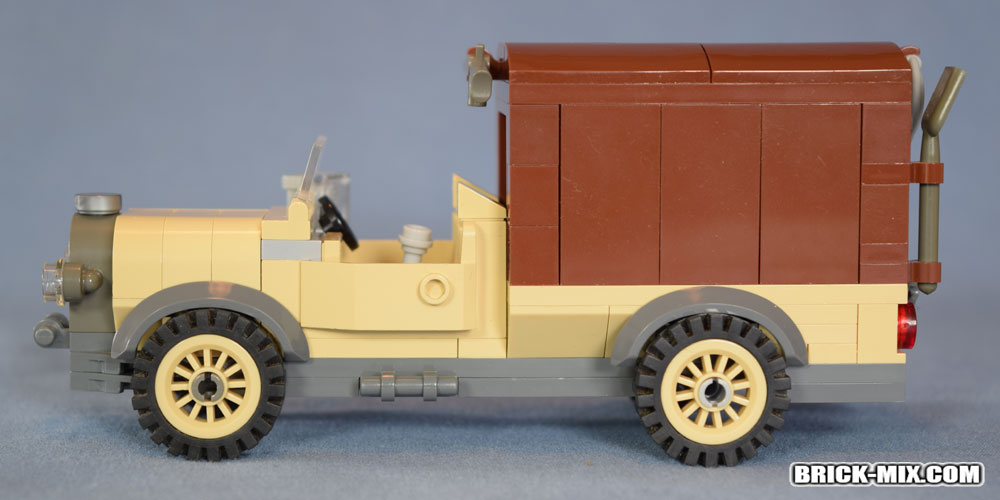 I wanted to use the same wheels as the original Scorpion Tracker that I liked so much, so one of the first things I thought to do is find good mudguard pieces to go with them.  They might look too close above, but it moves without problem and putting them a plate higher off the wheels didn’t look right to me. 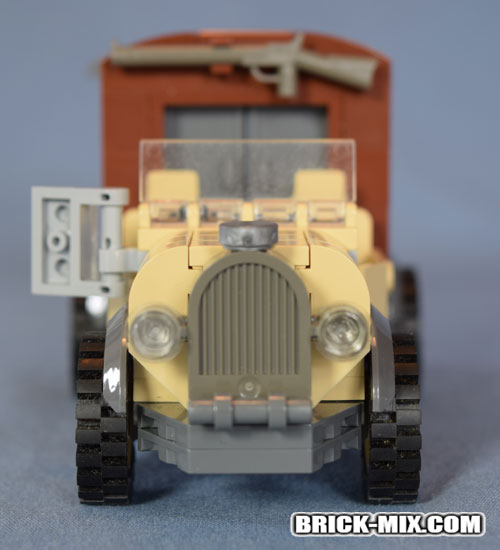 The front of the vehicle has the original grille piece, but in a different color.  I liked the dark gray instead of the light gray on the original Scorpion Tracker.  Unfortunately it doesn’t come in dark “bluish” gray to match the rest of the gray below the car, but the color discrepancy can be easily explained by that piece getting heated up so much by the engine, changing its color over time.  I added a radiator cap and some 1×1 round plates to use as lights. 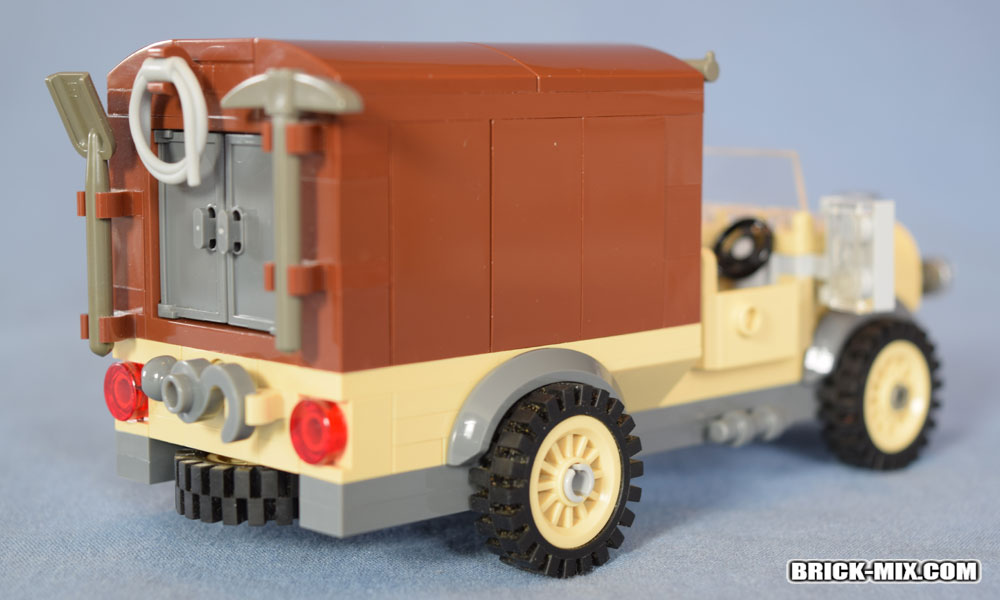 Although I have a fondness for the neat crate piece that came with the original Scorpion Tracker, I wanted to give the vehicle more room for equipment, treasure, and whatever else a team of adventurers might need space for.  The sides are made of panels with a thin wall to give it even more space back there.  It actually makes for enough room for a minifig to lie down back there with their head and feet at the sides, in case they need to camp out in the back on an adventure. 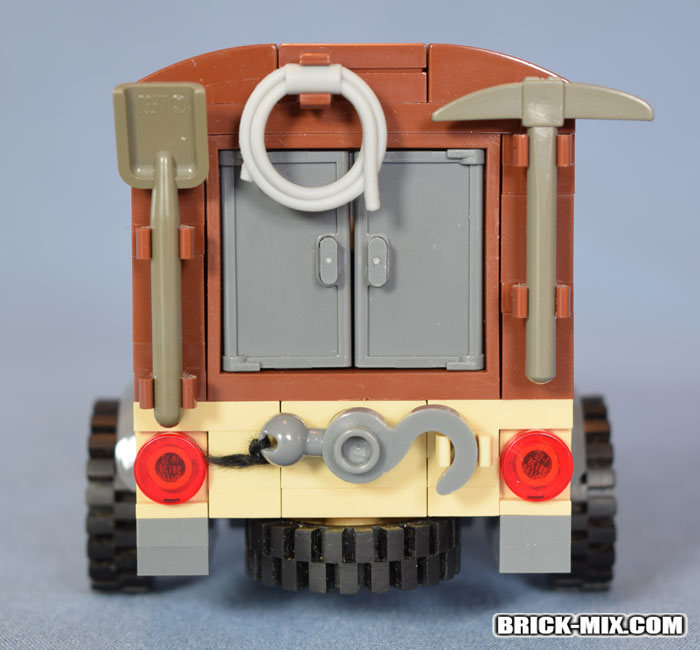 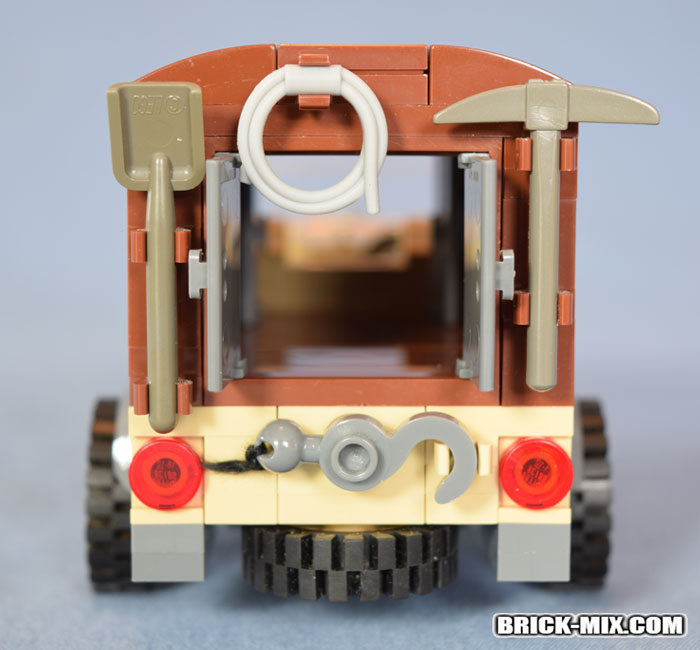 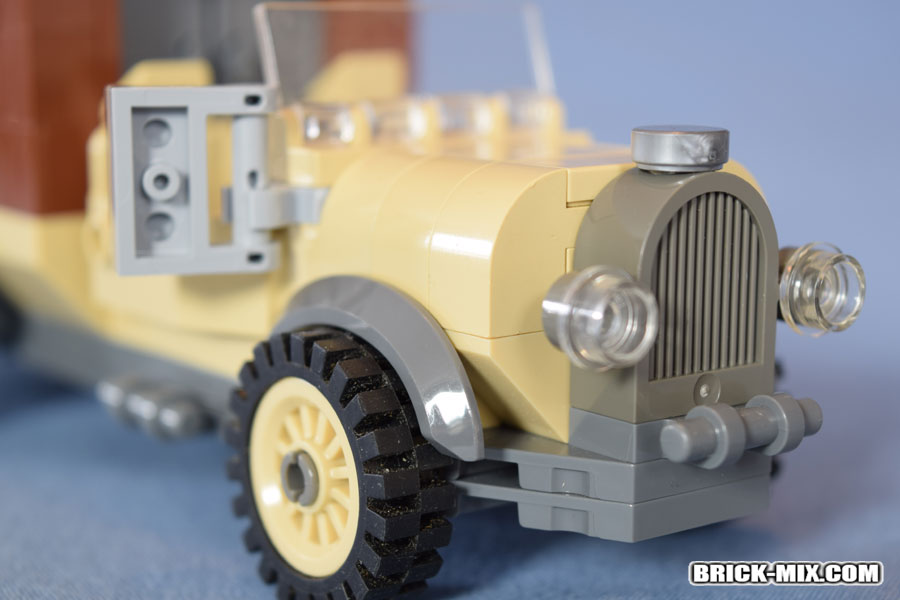 Here’s a good view of the front of the car.  I made it a bit more curvy than the more blocky original.  I made the front a more unusual shape with the tan inverted slopes coming away from the mudguards so it wouldn’t look strange not meeting properly with the trapezoid plates underneath.  This way it doesn’t meet with the mudguards on the whole side, but I like the way it looks.

There’s also a side view mirror only on the driver’s side.  I didn’t put one on the other side as some older vehicles only have the one, and I tried to go for an older feel for it. 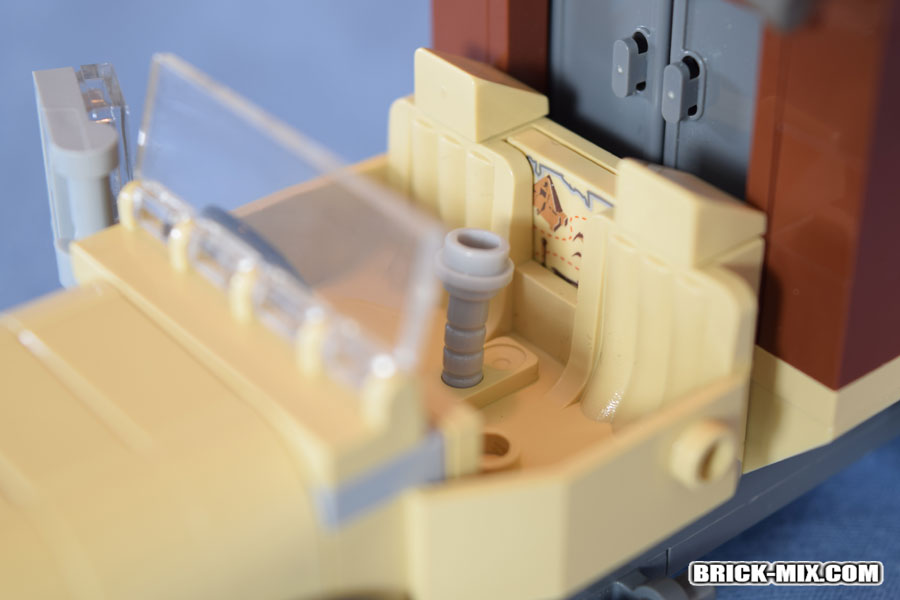 Where the adventurers themselves sit.  I added little slopes to the tops of the seats to make them look more complete (and give more support to our intrepid explorers).  You can see a map in the little compartment between the seats, and Part 61199 that I like to use as a gear shifter so much.  There’s also doors up front to access whatever is in the back, in case they need to get to something while on the go.  Though of course they try to stay seated and buckled in at all times.  No need for unnecessary risks when you’re already taking so many necessary ones. 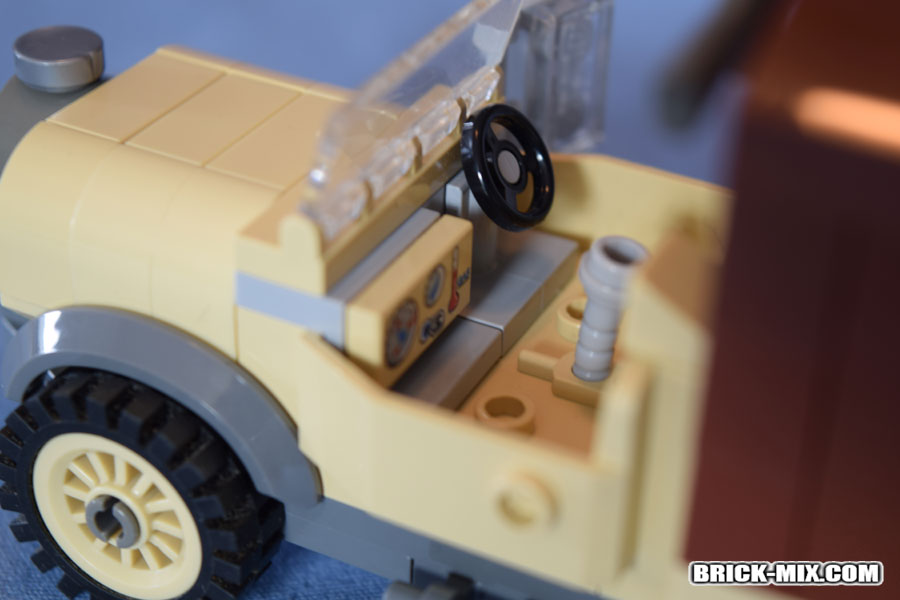 The front of the seating area has of course a steering wheel, and a little panel with gauges and a key.  That part was also in the original Scorpion Tracker, but it was between the two seats where I have the gear shifter now.  I like this better, as the driver doesn’t have to take his eyes so far away from the road. 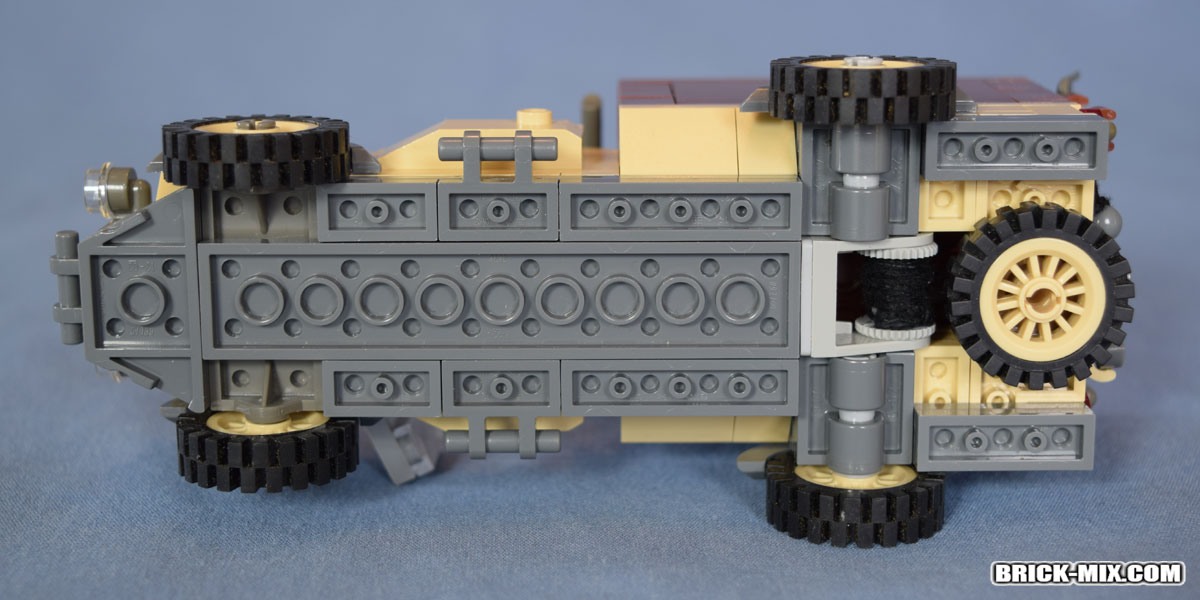 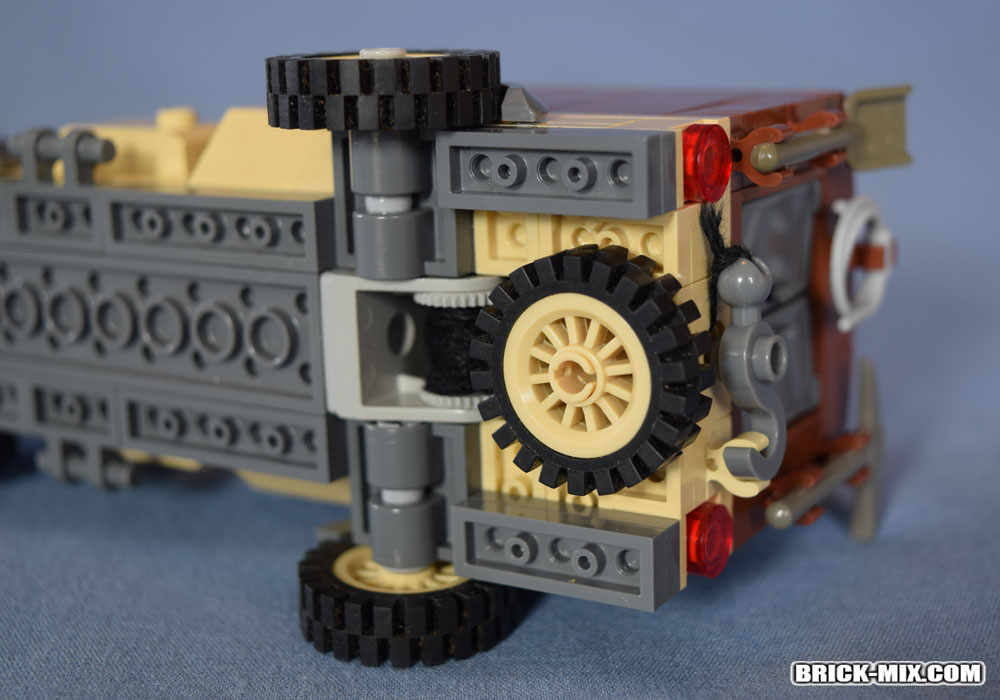 Underneath the car can be seen the winch mechanism and spare tire.  The rope for the winch hook extends out from a 1×2 brick with a hole in it directly behind the hook.  It’s reeled back in using the spool underneath. 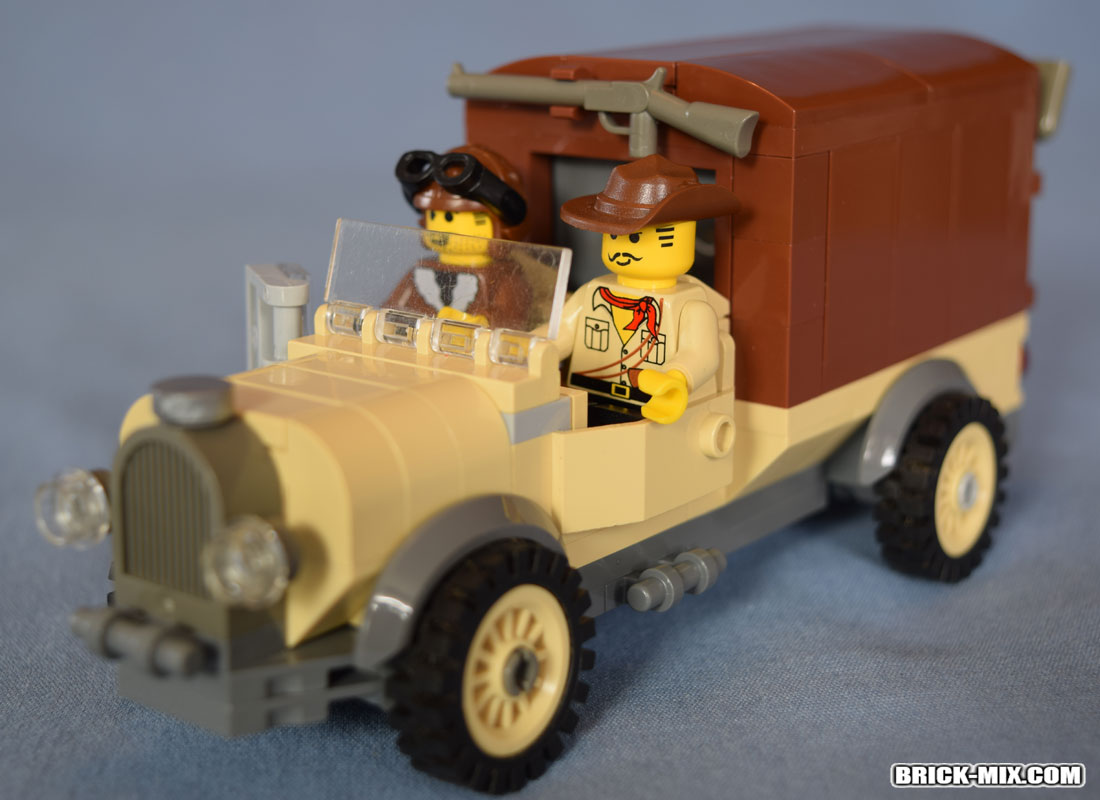 And here are our heroes, Johnny Thunder along with his friend and pilot, Harry Cane.  Johnny has the biggest appetite for adventure you’ll ever find and Harry prides himself on being able to drive or pilot anything, as well as being an expert navigator to anywhere on Earth.  Together they get into all sorts of trouble, and have plenty of fun doing it.

And here they are planning their next adventure.  They head out on adventures in their new and improved Scorpion Tracker, and into town in their Fancy Car, but their favorite mode of transportation is actually the camels, believe it or not.

Below is the LEGO Digital Designer file for Scorpion Tracker Redux.  The only part that the program didn’t have was the gauges panel, Part 3069bpx23, so I just put the closest thing it had in its place.  I also don’t have the rope running through the vehicle, but I’m sure you can figure it out, or invent your own way of doing it that doesn’t involve untying the string to run it through a 1×2 brick with a hole in it.  Have fun, adventurers!