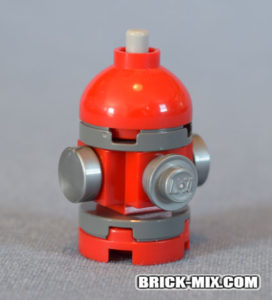 Another Tiny Build coming in at a humble 13 pieces, I present to you a fire hydrant.  I’ve never been happy with the fire hydrants I’ve seen in LEGO sets, so I was inspired to come up with my own.

The build is centered around Part 4733, a 1×1 brick with studs on all four sides.  It seemed like the obvious choice for something with all those outlet fixtures sticking out. The 4733 part in my build is red, which I was lucky to have a few of.  Apparently there’s not a lot of red ones around, so if you’d like to build this yourself but don’t have 4733 in red I think a dark bluish gray one works just as well.  You see almost none of it anyway, only in the little gap above the lower 2×2 round tile with hole.